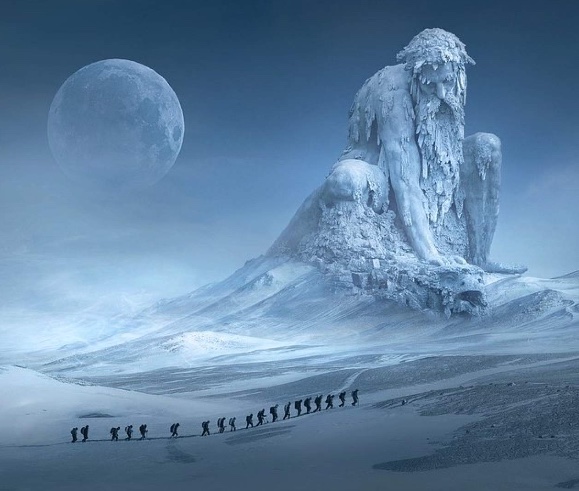 THIS SUMMER, engage in an exhibition led by the most well-known, experienced backcountry explorer in the world. Garrison Blake has led countless exhibitions through the most uninhabitable living conditions, but nothing could have prepared him and his group for what was to come. Gunnbjorn Fjeld Peak, located in the Watkins Mountain Range in Greenland, has the most inhospitable temperatures and weather conditions in the world. As their journey gets underway, Garrison’s primary goal is to keep his adventurers safe. The blizzard conditions continue to nip at their flesh with every step, and within miles of the base of the mountain, the air slowly clears. Off in the distance, the group spotted a giant man and what looks to be its confidant, frozen on top of a nearby mountain. He appeared to be the same height as Gunnbjorn Fjeld. The group continued on, pulling out their cameras the closer they got. Garrison’s camera flashed first. That did it! The flash of light woke the giant from its frozen state. Garrison had heard of this legend, but no one was ever able to confirm it. Kalaallit Nunaat is the protector of Gunnbjorn Fjeld, Garrison now had to figure out how to defeat or outsmart this giant in order to make it out alive. Turning back was not an option. The legend clearly states that if the frozen giant comes to life, your only chance of survival is to make it to the top of Gunnbjorn Fjeld. Will Garrison’s expertise help him to guide his group safely to the top? Or will they perish in this desolate area, and never be heard from again?

‘Myths of the Mirror’ blogged by D. Wallace Peach was inspired to begin a Monthly Speculative Fiction Writing Prompt. The above photo is January’s prompt. Stop by her blog, if you’d like to participate, and/or to just read the various participants written works.